The first recording session took place at the end of September 2009 at Soho Studios in Central London. The last few years I wrote enough music and lyrics for at least 3 different projects, an instrumental album, a solo album (guitar and vocals), and a band album. When I walked in the studio on day one I had a folder in my arm with notes and lyrics for 52 tracks. I also brought two guitars, one harmonica and a mandolin. I didn't have great expectations for the first session which I only saw as a way to break the ice and get accustomed to the studio.

The session marked the return of my beloved Fender acoustic, which is my main axe on this project. Just as it was on the previous album. As you can appreciate on the picture below, it's still in a pretty good shape! 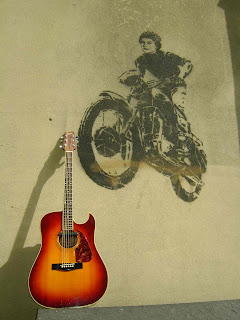 The one & only Fender Sannacaster


The first session turned out to be very good indeed. In a few hours we cut 7 solo tracks. Here's the list, although I must mention that for the time being I will only call the songs using their initials as titles may be subject to variations. A bit of secrecy is needed as to this day I have yet to decide what songs will make it to the final product.